This is the page to see the hardware that makes the magic that is this site happen, as well as other goofing off activities.

Honestly, what did you expect here, of course its a GNU/ThinkPad. These things are just the best. I flirted with other laptops for over a year here recently after having a first generation ThinkPad X1 Carbon for like 5 years. That thing was put through the ringer. It had more than 10 probably pints of beer poured right on it, was definitely dropped off of tables a few times, it even spent some time entirely underwater! This was the computer I had in my backpack for over a year of hitchiking and tossing that pack into the back of pickups all over the world.

When I got it, it was the cheapest one I could find, and therefore the specs were low. I knew an upgrade was in order, so I ended up with a T470 for a little, but something left me hanging on this machine and I didnt love it like I loved the X1. Maybe it was the shared experience we had. Whatever the case, after about a year of having a 15" MacBook as a work machine (provided by them of course) I decided it was time to go for the classic SoyDev 15" form factor landing me at an XPS 15.

This thing was honestly pretty nice. It was smaller than the MacBook and had a super modern design. But there was something sort of silly about it. The keyboard font was strange, and the carbon deck made it look semi gamerie. Plus I wasn't a fan of the huge Dell logo on the lid. I for about 3 weeks even had the 4k version, but it does not seem as durable, is definitely not as portable, and is just not the right style. The ThinkPad made a return with the current machine. The which I instantly had the same connection with as I did the X1. Its here to stay.

I am really not one for stickers, but something about the appeal of the sort of cluttered but very functional and utilatarian design of the Thinkpads of yesteryear make a slight amount on this seem fitting, hence the obligatory GNU/Linux and the extra Thinkpad logo which I bought to replace the outside logo, but its the wrong size so its living above the keyboard.

With the dynamic tiling window manager, minimalist config file workflow, and window gaps, of course everything here is keyboard driven. This site even doesnt have a clean way of management with a mouse at all as it is done entirely through SSH. This lands us at the heart of interaction between man and the GNU/Thinkpad, the keyboard

I remember always liking these mechanical things. We spend a lot of time a day on these so it makes sense in my mind to not have the plastic 14$ one that came with your computer be your only option. When the tool is semi personal and was chosen on purpose and wasnt just passively aquired, it makes the boring tasks that it is used for at least slightly more fun!

The first mechanical keyboard I had was my beloved Pok3r II keyboard that I hunted down, got a sweet deal on, and got a really cool keycap set for which at the time was really hard to find (the specific one). It was not common in 2014 or whenever this was to have the smaller layouts but I knew I liked it as I don't have a use for the numpad, everything in my life is ViM based so no arrow keys, and the function row I dont use too often. The idea of macros is already neato so why not have some on the keyboard while saving space!

This keyboard sadly was ruined by me though. The Z key hadn't worked for some time and I one day decided to take it apart to clean it. I knocked off the usb connector and after about 4 hours of me trying to solder it back on, had ruined the board enough I don't think it can be saved. It had Cherry Browns, and my all time favourite keys, it will be missed.

After this debocle, I did some searching and found that I like the feel of linear switches better, and there are literally tons and tons more options out there nowadays. So I ended up with my current board, an Akko 3068 Vintage with lubed Cherry Reds and foam in the case. I really like this board and I am stoked to say that it is as, if not more, /comfy/ than the Pok3r was through all those years.

All that being said about the Akko, this keyboard below with these GMK ThinkCaps is the holy masterpiece of an end game keyboard. No more mouse and a trackpoint built in? Clean desk with supremely functional styling of the keys? Blue Enter KEY?!?! Someone please mail me this board. 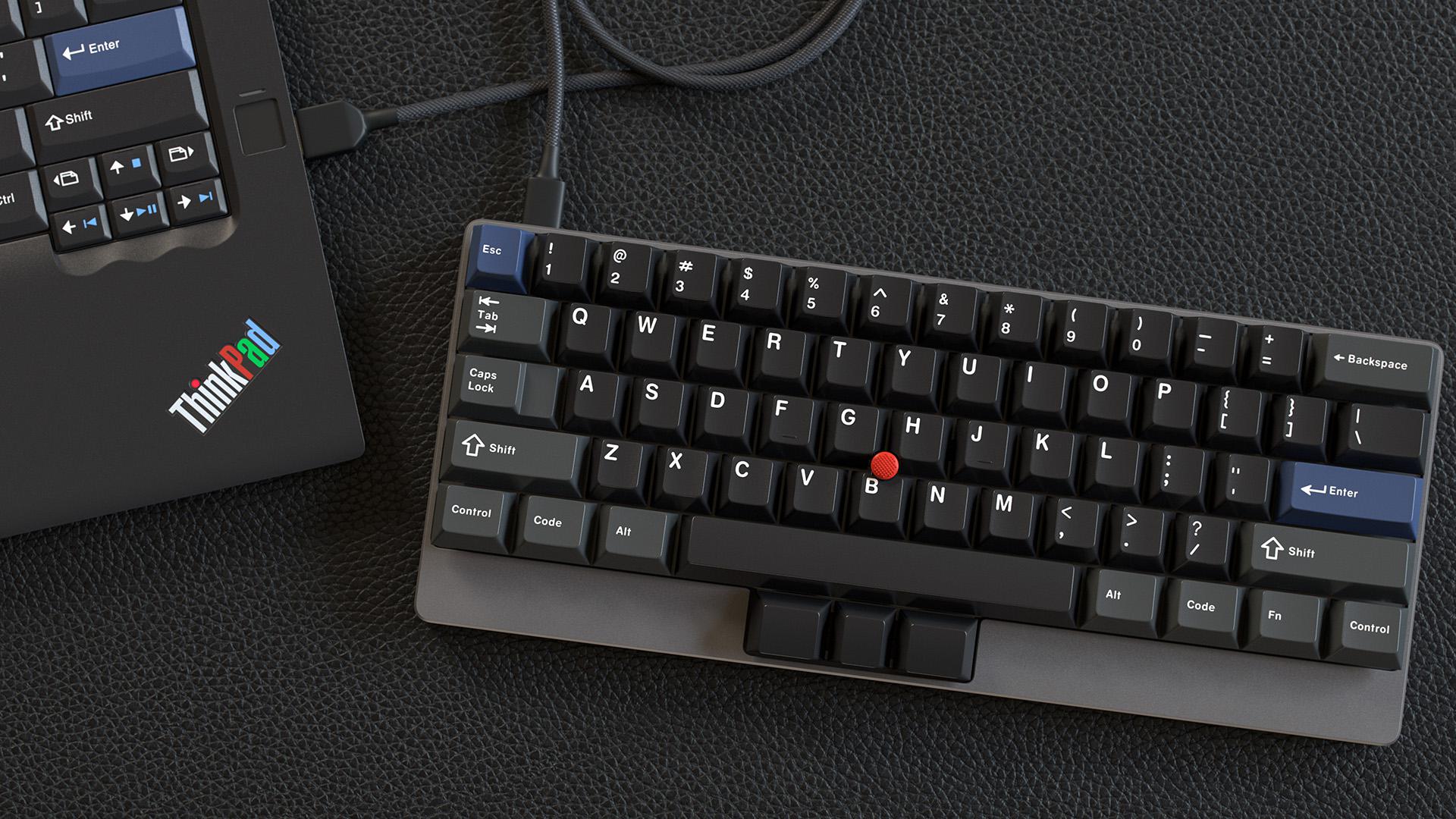